I spent the past weekend hanging out in Shenzhen’s Nanshan district - the home of world headquarters of Chinese tech giants like Tencent, DJI and Huawei. Xan and Anthony, a former colleague from Blockstack PBC and Spartan Capital’s newest hire were in town from the USA on the last stop of Blockstack’s inaugural China tour. 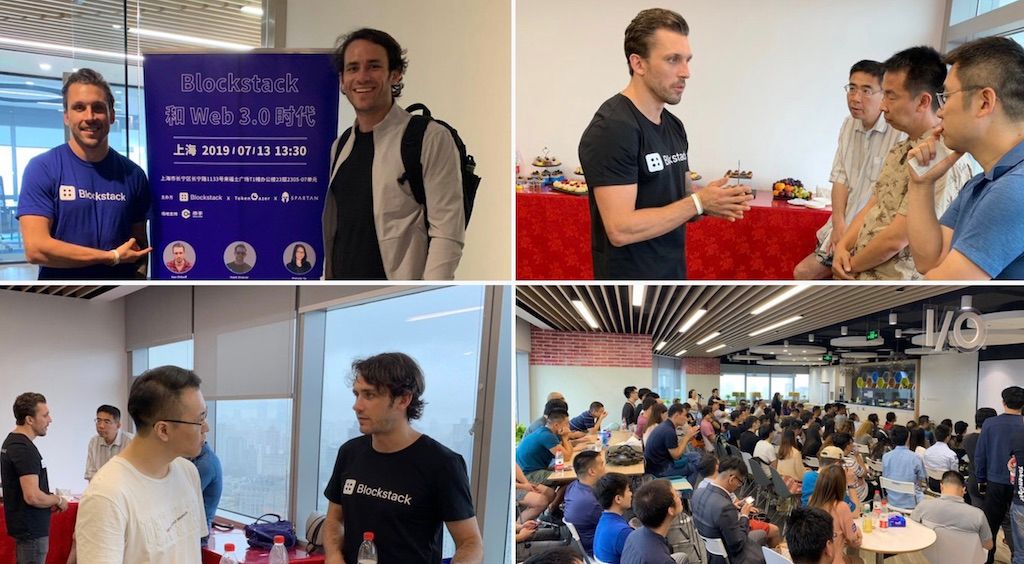 At a previous stop in Shanghai, they had been introduced to Luckin Coffee, a coffee delivery startup that is one of the country's fastest growing and newest unicorns. As a non-coffee drinker, I also wanted to introduce them to my favorite Chinese beverage chain, purveyors of fine cheese-covered tea, the legendary Heytea. Off we went in search of sugar-infused goodness.

No tea for you!

Our first stop was Heytea. I couldn't convince my fellow sucrose seekers to try cheese tea early in the morning. They wanted their tried and true caffeinated Luckin Coffee milkshake instead of what, to the uninitiated, must sound like a cup of earl gray with blocks of cheddar floating in it. Nevertheless, I still wanted a cup of Cheesy Four Seasons Spring tea (芝芝四季春).

I tried to order at the counter but it turns out that since this is the heart of China’s tech industry, you can only order through their WeChat mini app (小程序). I scanned the QR code and tried to place my order. 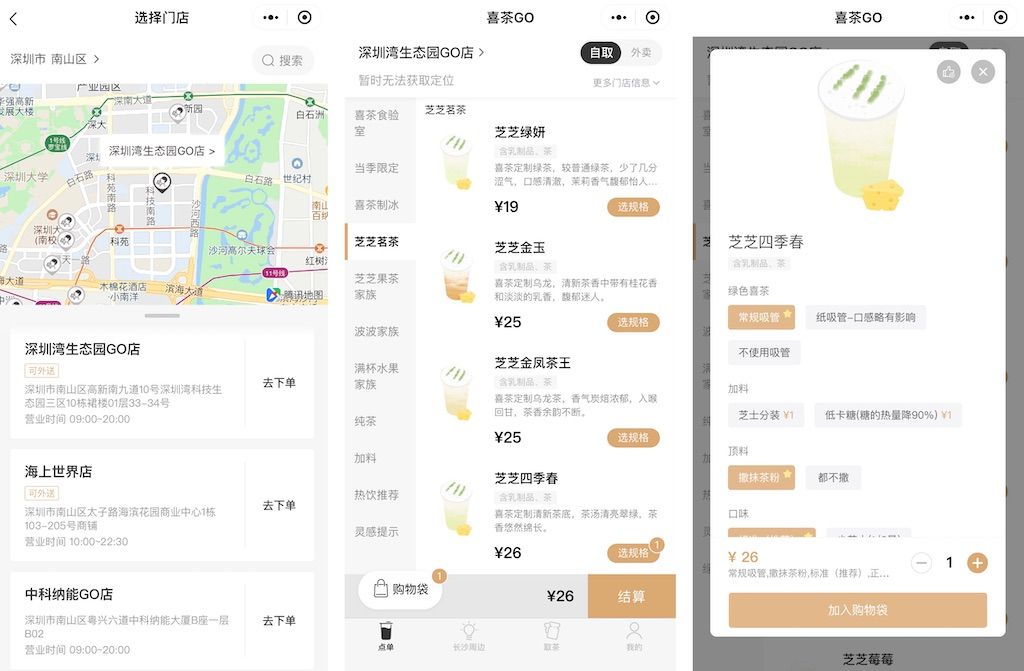 The mini app quickly allowed me to customize my drink. I could adjust the sugar or ice content and even ask for less cheese. I opted for the standard drink and clicked checkout. This is where I started to get a taste of the dystopian future where eating requires someone else’s permission.

The checkout form wanted me to enter a local phone number to notify me when my drink was ready for pickup. Strange - I was placing this order through a messaging app, you’d think they could just send me a message there. But there’s a catch, you can’t get a local Chinese phone number these days without registering an ID card and providing address proof. I used to have a number of Chinese phone numbers but they were canceled because I never provided identification information in the years after the policy was implemented. I put in a friend’s number instead.

Moving on, I tried changing the payment option, but the only other option besides the default of WeChat Pay was some sort of prepaid Heytea wallet I didn’t have. 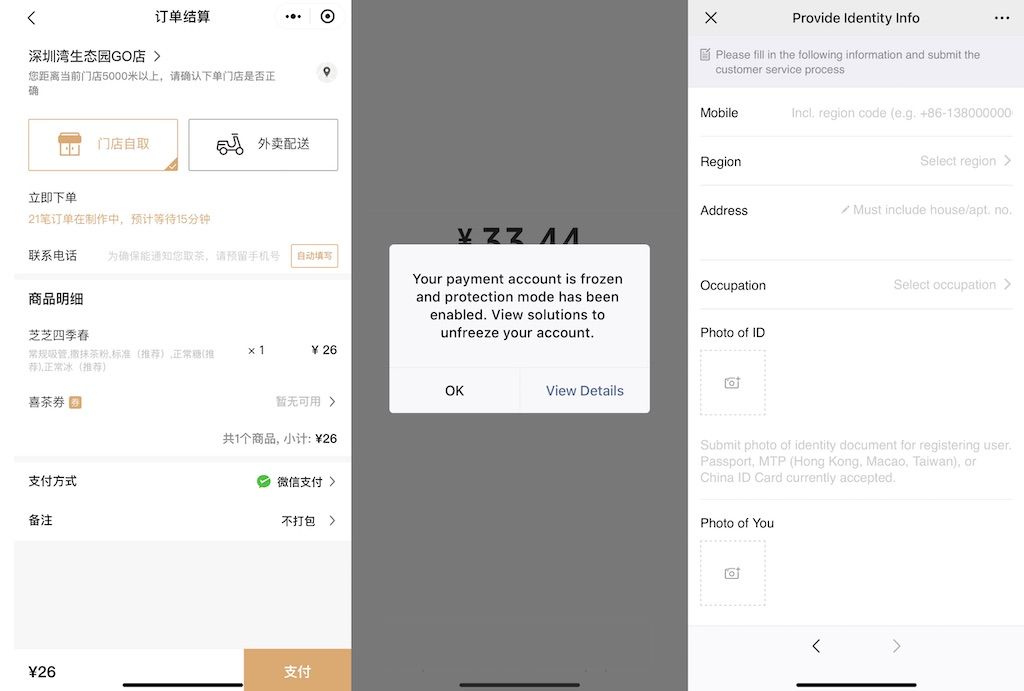 In the past, I rarely use WeChat Pay because the Chinese version has never worked with the foreign-owned Chinese bank I bank with. That said, I did have 33.44 CNY in my WeChat wallet which came from someone paying me back sometime in the past few years for something when they didn’t have any cash. Since my drink was only 26 CNY, this would be enough.

I clicked pay and was promptly informed that my account was frozen and “protection mode” has been enabled. Interesting - protection from whom exactly? But never fear, the dialog promised solutions if I clicked forward.

I clicked view details where I was offered a lovely form asking for identity document photos, address and a selfie - the standard AML/KYC security theater dance. Apparently Tencent or the government was concerned that I might be building some sort of terrorist army or running a tea-based money laundering operation with my less than 5 US dollars.

By this time, my Blockstack colleagues were starting to get impatient with me - they were craving their morning coffee fix while I was fighting with my phone trying to get cheese tea to come out of this futuristic shop.

Unwilling to admit defeat and still craving Heytea (it’s really good!), I decided to try another approach. Thanks to China’s complicated regulations around cross-border payments and capital controls, WeChat Pay isn’t one company with one wallet in one currency, but multiple companies running wallets in different currencies in different jurisdictions. As a Hong Konger, I also have a WeChat Pay HK wallet. While it has gained little traction among Hong Kongers in Hong Kong, it is useful to make for certain types of payments in China. (Exactly which types of payments can be made with a WeChat Pay HK wallet is complicated and perhaps a topic for a future post.)

I started searching around WeChat’s everything-and-the-kitchen-sink interface for the setting that would let me switch from the China wallet to the Hong Kong wallet. It’s a setting that’s is hard to find and typically hidden unless your account meets a set of unpublicized conditions. I finally found the “Select region wallet” setting and switched over to my empty Hong Kong Dollar wallet before retracing my steps to the Heytea mini app and starting to place my order again.

By this time almost ten minutes had passed, and my caffeine-deprived friends had started wandering around searching for Luckin Coffee as I tried to follow them engrossed in solving my WeChat Pay tea problems. 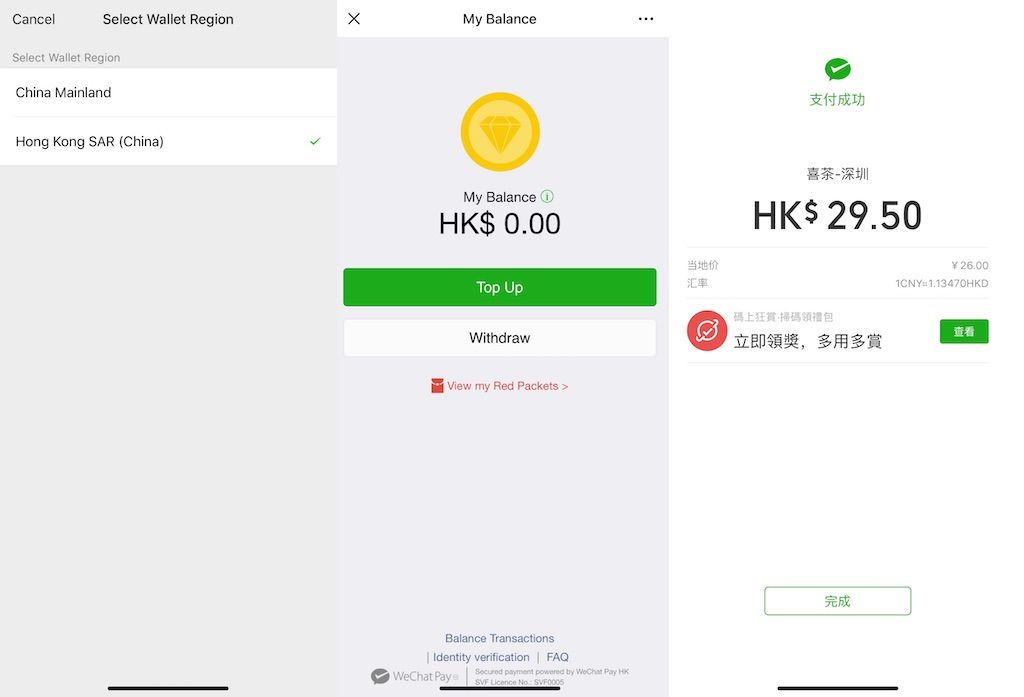 This time around, when clicking pay, I was prompted with a Hong Kong dollar price and asked for my WeChat Pay passcode to confirm payment. But this wasn’t the end. Because I never added a bank card or money to my WeChat Pay HK wallet, purchases are processed through the Hong Kong-issued Visa credit card I’d linked to the account. This meant I was redirected to the Verified by Visa web page run by bank and forced to wait for a texted verification code which took a minute or two to appear while roaming. After entering the code and another redirect, I was rewarded with a successful payment screen. After almost 15 minutes of fighting with my phone, delicious Heytea was on my way.

As I was achieving this small victory in my battle against WeChat Pay and their war on my Heytea habit, we’d already walked into a nearby Luckin coffee and my friends were trying unsuccessfully to order Mandarin Orange Soda Coffee (it looked as horrible as it sounds, but they swear it tastes great). The cashier and our foreign visitors were having communication issues, so I stepped in to translate. It turns out this shop was just like the nearby Heytea - the only way to order coffee is through their app with payment via WeChat Pay. Neither cash nor ordering via humans was welcome here.

It turns out Anthony and Xan were a lot more creative than me at circumventing the great wall permissioned money had built in in front of their coffee. They suggested that the cashier use her personal app and WeChat Pay to place their order and that they would give her cash. Genius! Why didn’t I think of that?

The cashier not wanting to rip anyone off apologized that she didn’t have 2 yuan change - about 30 US cents - to give them for their 50 CNY bill. When she confirmed with me that they didn’t want the change, the coffees quickly appeared. In a few short minutes, they’d successfully overcome the same AML/KYC barrier to sugary drinks that took me, a long-time China resident and bitcoiner, 15 minutes to work around. Impressive!

Is this the future we want?

I’m sharing this story because it is a glimpse into what is potentially a scary future where cash is dead and our only option is centralized, permissioned money where someone else decides how and when you can spend the fruits of our labor. In our story, we ran into some inconvenience while buying unhealthy beverages that we probably shouldn’t be drinking in the first place. It’s doesn’t take a small leap of the imagination to imagine this same situation in a supermarket. Imagine having your WeChat Pay account frozen because you said something someone with power doesn’t like. Imagine not being able to buy food to feed your family because this is the only payment option and cash no longer exists.

As a consumer, I love the convenience and benefits that cashless payments bring. As a merchant, I love the reduced payment friction and increased sales that cashless payments bring as they let me to do business with customers thousands of miles away. As supporter of individual sovereignty, cashless payments scare me. Unless we can turn Bitcoin or something like it into a permissionless, trustless payment system that people actually want to use, the future looks like a dystopia where we give away a huge amount of control over our lives to people who have a historical track record of being unworthy of our trust.

Names on airline tickets help them make more money, not keep you safe.